This past July I’ve been seeing all sorts of rabbits in the outdoor grassy spaces where I work. So far, they all appear to be Eastern cottontails, and during the daylight hours I see them on overcast days, during a gentle rain, or when things are quiet after a drenching storm. There is a wooded area nearby for a quick retreat, but I seem to be tolerated if I don’t stop and look too long. They are wary enough that I have to be content with memory and photos for later sketching.
I’ve been seeing all sizes – from larger adults to young bunnies I could cradle in my hands. The young ones are especially jumpy and restive, so I try not to linger. Naturally I’ve now been reading up on Eastern cottontails and was surprised to find a wide range in the US up to the Canadian border, even extending south into central America. How adaptable! They are vegetarians and like to inhabit habitat edges – the fringes between woods and meadow, lawn and garden. The sources say that rabbits prefer to feed at twilight or night, even though I’m seeing plenty during the day when the sun is behind the clouds.

Exploring nature as a child, I thrilled to find evidence of rabbit “nests” – magical hollowed-out circles in the tall grasses or low shrubby foliage in the woods. Sometimes a bit of fur was the only evidence inside the cozy nest of twisted and flattened grass, but I could never surprise any residents. Only if I was lucky and very quiet, I might glimpse the ball of white furry tail bounding away, then suddenly vanishing. I intended to do some quick gesture sketches in pen, but those turned into detailed studies… because, well… just because. Caught up in trying to capture the mass and weight of the larger ones, and describing the fur with the right pen strokes, I dropped into my default mode – go for the detail. Observation and making an eye-hand-subject connection is a way for me to learn about what I’m sketching, and detail does that for me. The challenge!
A large and shiny eye, fur that varies in direction and color, unusual and unfamiliar shapes of skull and body. And the fur color – unique in that it has gray and brown fur tipped with black, and then russet and white parts. Each rabbit I saw seemed to have slightly different patterns of brindled black markings. Some almost all brown with very little black, some more gray, others heavily marked with black. The markings mimic the dappled shade of leaf litter or pine needles, even dry grasses. A good strategy if one is part of a food web.
Our influx of rabbits might be due to the expanding territory of the invasive pythons that curse the Everglades and beyond. These large constrictor snakes have become a new enemy to our small mammals. Biologists have documented the loss of rabbits, raccoons, possums, and foxes in Florida, and the statistics are sobering. Sigh. But that is a post for another day.
Today I will just enjoy the experience of sharing a space with our rabbit families, and keep a lookout for pythons.
Media:
Aquabee Super Deluxe Mixed Media sketchbook
Mechanical pencil .7mm
Rabbits: Pitt Artist Pen S, Sepia
Fur: Micron Pigma 01, black
Watercolor pencils – Derwent and Kimberly
Niji waterbush, round M
Posted by Elizabeth at 3:26 PM 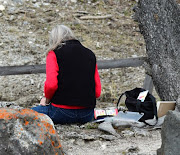 Would you like to support A Nature Art Journal?